The All Blacks are the leading point scorers of all time and have played far less tests than the next highest on the list, France. Since the IRB World Rankings started in 2003, they have regularly held the top ranking, even holding the top spot for longer than all other countries combined.

The All Blacks are known for the distinct black playing uniform, which lends to their name, the All Blacks. The silver fern, a national emblem, rests on one side of their chests with current sponsor Adidas on the other side. The New Zealand Rugby Team first donned the black uniform in 1893, although they originally wore white shorts when playing All Blacks rugby. At around the turn of the 20th century the New Zealand Rugby Team began wearing black shorts.

The current alternative All Blacks rugby jersey is white. This is used when playing against a team with a similar jersey colour, such as Scotland.

In 2012 the All Blacks finally joined most other top tier international teams in adding a sponsor to the All Black jersey. For a period of time beer company Steinlager had a logo on the opposite breast to the silver fern emblem. However, this was removed since adidas became a sponsor in 1999, with the adidas logo taking it’s place. New sponsor AIG will now have a logo on the chest of the jersey. The move was heavily criticised by New Zealand rugby fans, who argued the jersey was sacrosanct. However, the NZRU insisted it was a commercial reality. TO try and soften the blow, AIG agreed to remove the border from the logo, helping it integrate better with the jersey. Further more, the logo is only a third of the size allowed by IRB regulations.

ALL BLACKS’ RUGBY COMPETITIONS AND RIVALRIES

Every year since 1996, the New Zealand Rugby Team, Australia and South Africa compete in the Tri Nations. In the competition’s fifteen history the All Blacks rugby team have won it ten times, South Africa three times and Australia twice. Because the three teams usually dominate the IRB world rankings, the Tri-Nations tournament is considered to be the toughest international rugby competition in the world. From 2012 Argentina will join and it will be renamed the Four Nations.

Since 1932, the All Blacks have played the Wallabies, the Australian Men’s National Team, for the Bledisloe Cup. It is one of New Zealand’s most cherished rugby trophies, with New Zealand Rugby Team members often saying it means more to them than any trophy outside of the World Cup. This is most likely due to the five years Australia held it from 1998 till 2002. It is also one of the most historic trophies in international rugby union, having first been contested in 1932. As of 2010, the New Zealand Rugby Team has won the trophy 39 times and Australia twelve times.

The All Blacks have a historic rivalry with South Africa. They only have a 55% winning percentage against the South African Springboks, compared to their average winning rate of 75%. Until rugby went professional, South Africa actually had a better winning percentage against the All Blacks. They first played each other in Dunedin in 1921 and have contested the Freedom Cup since 2004. The All Blacks’ first test series victory over the Springboks in South Africa was in 1996, and is considered by many New Zealand rugby fans as their proudest memory of the All Blacks. The 1996 team, featuring such all-time greats as Sean Fitzpatrick, Christian Cullen, Jonah Lomu, Zinzan Brooke and Michael Jones, was given the name ‘The Incomparibles’ by the New Zealand public and media.

THE ALL BLACKS HAKA

The All Blacks perform the distinctive Haka before all matches. The Haka is a traditional Maori (native New Zealand) dance, often but not always used as a war dance. It is performed at the beginning of matches in different variations by many New Zealand national teams.

The Haka was first performed by the All Blacks in 1884. The most famous Haka, Ka Mate has been consistently used since the turn of the 20th century. In 2005, the All Blacks designed their own Haka, Kapo o Pango, and use it sporadically.

In recent years the New Zealand Rugby Team Haka has began to attract criticism, particularly from journalists in the Northern Hemisphere. It has been questioned whether it gives the All Blacks an unfair advantage and whether it has a place in the modern professional game.

This is the fierce, powerful man
Who caused the sun to shine again for me
Up the ladder, Up the ladder
Up to the top
The sun shines!
Rise! 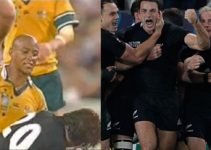