A TALE OF FOUR FLY HALVES…

Stephen Donald has easily been the most derided All Black over the last two seasons. Good players being stuck behind once-in-a-lifetime All Blacks is nothing new. Players like Frano Botica, Norm Hewitt, Marty Holah and Nick Evans may have walked onto many international rugby teams, but they had their chances severely limited by living in the shadow of All Black legends. However, no one has felt the burden of playing second fiddle to a legend more than Stephen Donald. The bar set by Dan Carter is so high that mistakes that might be glossed over if made by fly halves of other international teams, are magnified by New Zealand and its media, with the offending All Black number ten getting pulled over the coals. In particular, Donald was, probably unfairly, solely blamed for the All Blacks loss in Hong Kong to the Wallabies in 2010. This seemed to be supported by the All Black coaches, who ensured Donald played only a limited role in the ensuing Northern Hemisphere tour. They clearly regretted wasting the prime opportunity of developing a back-up to Dan Carter on Stephen Donald as they overlooked him for the following campaigns.

Easily one of the most successful Waikato pivots ever, Donald built his career on using his large frame to take the ball hard at the line as well as strong defence, chip kicks and a reasonably high percentage success rate kicking at goal. Of the number tens in New Zealand playing behind Dan Carter between 2007 and 2011, he was the most well-rounded, experienced and reliable. There has been very little debate that since 2007 he has been the second best number ten in New Zealand, and particularly shone in Super Rugby when Dan Carter played a season in France. He is an alumni of Wesley College, the same school as rugby great Jonah Lomu. Donald debuted for Counties in 2002 when they were in the second division before moving to Waikato the following season and winning the Air New Zealand Cup with them in 2006. He has played for the Chiefs since 2004, guiding them to the final in 2009. Donald has amassed 22 tests since he debuted for the All Blacks in 2008.

Following the 2010 season, but certainly not for the first time in his career, Donald was ridiculed by the New Zealand rugby public. Even the staunch loyalty of his Waikato fan base was tested, particularly when at times the criticism clearly got through Donald’s usually easy going exterior, leading to well publicised errors during the Super Rugby and ITM Cup tournaments. Although a tiny sub section of rugby followers starting promoting a romantic vision of Donald redeeming himself in a Rugby World Cup final, that same thought was giving nightmares to all other New Zealanders. They breathed a sigh of relief when Colin Slade was selected to back up Dan Carter, despite Slade coming back from two broken jaws in the 2011 Super Rugby tournament and having severely limited game time. This lack of game time and the pressure clearly effected Slade, who never looked assured when deputising for Dan Carter. He too felt the immense pressure of being judged by the standards of a legend, but fortunately he never had the opportunity to be blamed for losing a test as Donald was.

When Dan Carter’s groin injury and subsequent withdrawal from the 2011 Rugby World Cup sent ripples around the world, Slade felt that pressure more than ever. Indeed, the odds on New Zealand winning their home tournament lengthened noticeably. Unfortunately for Slade he soon succumbed to a similar injury to Carter and his tournament was also over. New Zealand was now onto their third choice fly half and it was time for young Aaron Cruden to step off his skateboard in Manawatu and onto the biggest rugby stage in the world and play his first rugby international in 15 months in the knockout stages of the world cup. From the Waikato River where he was white baiting, Donald, the much maligned and nearly forgotten man of New Zealand rugby, was finally called to take his place on the bench. History will say how the curse of the All Black number ten jersey struck again, with injury forcing Aaron Cruden from the field just before half time. Donald, wearing a jersey that would be more appropriately sized for the much smaller Cruden, made his Rugby World Cup debut in the final. He kicked what turned out to be the match winning points as well as tackled strongly, took on the line and kept the French in their half with one well-timed kick in particular.

While it would be easy to wonder how easily the All Blacks would have won the cup with the incomparable Dan Carter, perhaps there was an element of fate about the horror run of injuries to three All Black number tens. Had Carter not been ruled out of the tournament would the rest of the All Black team have stepped up to pick up the slack, displaying the grit and determination that would take them to the final? If Colin Slade had not been injured would he finally have imploded in the knock out stages of the World Cup? Would Aaron Cruden have been up to the physical defence required in the second half of the World Cup final, or have had the composure to survive the white hot pressure put on by France in the last twenty minutes?

By all reports Stephen Donald is the quintessential team man, staunchly loyal and a proud New Zealander. It is hard to fathom why he did not seek an early release on his contract and leave the New Zealand rugby goldfish bowl after his shoddy treatment. Fortunately for New Zealanders he hung around and was ready and willing to answer his country’s call. He most certainly was not the hero New Zealand wanted, but on October 23 2011, he was the hero they needed. 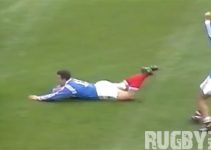