What are the different rugby positions?

Rugby Union playing positions can be a world apart. In fact, some rugby positions are so specialised that an entire component of the game, the scrum, must go uncontested when there are not enough specialist front rowers available. Rugby union is a game for all sizes, and those sizes, and generally certain shaped people gravitate towards certain rugby positions due to the position requirements, from the short, squat props wearing jersey numbers one and two, to the two metre string bean locks wearing rugby jerseys four and five.

Here are the rugby positions explained, including the  jersey numbers they are assigned to, starting with the forwards and finishing with the backs.

RUGBY JERSEY NUMBERS ONE TO THREE: THE FRONT ROW

The front row is made up of players wearing the first three jersey numbers and arguably are the most popular rugby positions explained requests.  They are called the front row because the three of them bind together to make up the first row of the scrum. The loosehead prop wears the number one jersey, he only has one mangled cauliflower ear, because one side of his head is inside the scrum. Jersey number three, the tighthead prop has two cauliflower ears because both sides of his head are in the scrum. Sandwiched between the two props wearing jersey number two is the unfortunately named hooker; called this because when the ball is put into the scum he hooks the ball back with his legs. The hooker is also responsible for throwing the ball into the lineout. Build-wise, the hooker is probably the smaller of the forwards and in the modern game usually plays more like the loose forward rugby position than a prop.

The props, stereotypically at least, are usually very stocky. Despite usually being considerably shorter than the locks, they usually challenge them at the weigh in. Apart from being dominant participants in the scrum, their jobs are to lift in the lineout and hit rucks. They also drive the ball up close to the ruck, particularly with pick and drives.

The next rugby positions in the forwards are the locks. At professional rugby union level, a lock won’t usually get any change out of two metres in height. They are almost always the tallest rugby players on the field and their job is to be lifted at lineout time and kick off time to catch the ball. Along with the front row they make up the tight five. They are called this because they are responsible for the ‘tighter’ elements of rugby union. They stay near the ball, hitting rucks and ensuring the ball is secured at the tackle. Generally in the lock rugby positions there is a tighthead lock who locks behind the tighthead prop in the scrum and a loosehead lock, who latches on behind the loosehead prop rugby position. The tighthead lock is usually bigger and plays a tighter game, whereas the the player in the loosehead lock rugby position is slightly smaller and plays a more wide ranging game compared to the tighthead lock.

The loose forward rugby positions are made up of a blind side flanker wearing number six and an openside flanker wearing number seven, named according to the side of the scrum they bind on. Completing the loose forward trio is the number eight. Guess what jersey number he wears? The number eight pushes at the back of the scrum.

The back rower rugby positions have less responsibilities in the scrum and lineouts, although they participate in both by pushing in the scrum and lifting and jumping in the lineout, particularly the blindside flanker. However, they dominate the tackle ball situation are usually the first to either make the tackle or reach the ruck, especially the openside flanker who constantly plays the fine line between attempting to turn the ball over and illegally slowing the ball down. The loose forwards usually feature a lot in open play with the ball in hand, particularly the number eight, are usually the fittest of the forwards.

RUGBY FORWARDS ON THE BENCH

Rugby players on the reserve bench usually have a position or group of rugby positions they are covering. However, in the case of jersey numbers 16, 17 and 18, it is actually required by the rules. The reserve hooker wears the number sixteen jersey and the 2 reserve props wear the 17 and 18. It is a legal requirement to carry these reserves on the bench so that the scrum can continue should there be an injury to all three of the front rowers. For years there was a debate over the introduction of the third reserve front rower, increasing the bench number to eight.

Generally the next rugby jersey number, 19, is worn by the lock cover with number 20 covering the loose forward rugby positions.

The halfback rugby position, wearing number nine, forms the vital link between the forwards and the backs. At scrums and at rucks he clears the ball to the number ten – a job where every second counts. Quick and accurate passing, even from the ground, is paramount for a half back. Too slow and it gives the opposition a chance to rush at the backline, shutting down any potential attack. In the modern game half backs also constantly snipe around the fringes of rucks, taking the opportunity to steal easy metres where possible. The half back is usually the smallest player on the field. Very fit, the half back has to be present at almost every ruck and often controls the pace of the attack and directs the forwards at rucks, pick and drives and mauls.

The rugby union version of the quarter back, the fly half rugby position is the key decision and play maker in open play. A skilled kicker, the number ten provides the clearing kicks and usually the kicks at goals. Some of the most renowned players of the last ten years have played in fly halves’ rugby positions. Players like Dan Carter and Jonny Wilkinson are often credited for their team’s victories through their play making and goal kicking. While in previous generations a number ten could get by on his kicking and strategic nous, like maestros Grant Fox and Andrew Mehrtens, today’s number ten must be a rugged defender too. They constantly have big forwards running at their channel. Responsible for freeing the backline, a fly half must have an excellent passing game. The half back and the fly half make up the inside backs.

RUGBY JERSEY NUMBERS TWELVE AND THIRTEEN: INSIDE AND OUTSIDE CENTRE

Along with the fullback, the wingers make up the outside back rugby positions. The two wingers guard the sidelines and work with the fullback to provide cover for opposition kicks. The wingers are known primarily as attacking weapons, particularly as finishers. Wingers are the fastest players on the field, and since Jonah Lomu hit the scene at the 1995 World Cup they have gotten bigger and bigger. The right winger wears the number fourteen jersey and the left wears the number eleven. The role of the wing rugby positions has evolved over recent years and usually fluctuates between a defensive and attacking focus. Using the New Zealand rugby team as an example, their wing rugby positions were taken by wingers with predomninantly an attacking focus, Joe Rokocoko and Sitiveni Sivivatu. However, between the 2007 and 2011 Rugby World Cup their wingers evolved to focus on a more defensive game as rugby union began to be dominated by kicking. While attacking wingers were still important, their ability to diffuse the highball became one of the primary focuses. Corey Jane, a transplanted fullback eventually took one of the wing roles and by the time of the 2011 Rugby World Cup, Richard Kahui, a transplanted centre took the other. Both players were known for their reliability and ability under the highball. Despite still having a nose for the tryline, neither are the prolific try scorers of the predecessors.

Historically known as the custodian, the full back was usually a defensive rugby position. The number fifteen was responsible for fielding opposition kicks and as the last line of defense. However, especially in the professional era the fullback has become one of the biggest attacking forces in the side. Able to enter the attacking line to create numbers out wide or to come in at the end of a try scoring movement the fullback is now a potent attacking force and often scores a similar amount of tries to the wingers. With the new modern rule interpretations the fullback is as likely to run the ball back as to kick for territory. However, kicking is still a very important part of a fullback’s repertoire. It has been argued that fullbacks are the last rock stars in the game. Since the professional era most positions have become dominated by defense. However, often the last bastion of electric broken field running comes from the fullback rugby positions.

RUGBY BACKS ON THE BENCH

Although it’s not set in stone, there are usually three players who specialise in the back rugby positions on the reserves bench. There is almost always specialist cover for the half back and flyhalf rugby positions, wearing jerseys 20 and 21 respectively. The last player on the bench, rugby jersey 23, is often a utility back, able to cover more than one position in the midfield or outside backs.

Now that you have had the rugby positions explained, understanding the game of rugby should be a lot easier. At the very least, next time you see numbers 16 or 17 warming up you’ll know one of the props will will be coming off soon. 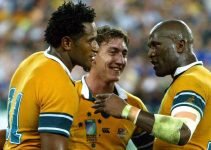